Neopost Foofwa believes more in human than in aesthetics. It believes in hard-work, study, research and discipline mixed with distance, playfulness, humour and love.

Compagnie Neopost Foofwa was created around the intuition there are beautiful new things (Neo-) to be created after and with the past (-post). It defends respectful salaries for dancers and collaborators. It considers each one of its decision as political. The company is for sharing and against copyrights. It believes that research, pedagogy and cultural mediation as intimately linked to the supreme act of creation. It loves to collaborate with well-known and less known artists from all sort of artistic practices. The company has created and produced dozens of works for the stage, atypical spaces, outdoors public spaces and video. It has explored the notions of self-solos, digital movement for the body, philosophy and history in the flesh. It has developed new forms of performances such as: ‘Danceruns’, ‘Choreographic One-man-shows’, ‘Dancewalks’ and ‘Dansongs’. Neopost Foofwa is supported by the City of Geneva and the Republic and Canton of Geneva for the year 2021. 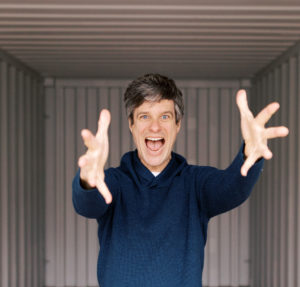 Foofwa occupies a pivotal position between tradition and innovation in the choreographic field. Dancer at the Stuttgart Ballet and then at the Merce Cunningham Dance Company, choreographer since 1998. Since 2000 with his company Neopost Foofwa, he has been studying the relationship between dance and sport and invented the “Dancerun”, a hybrid activity between running and dancing over several kilometers (2003). He also studies the relationship between audience and choreographic work in The Making of Spectacles (2008) and Quai du Sujet (2007); the digital body in Media Vice Versa (2002), Avatar dance series, Second Live series (videos) and BodyToys (2007); the historicity of the dancing body in Descendance (2000), Le Show (2001), MIMESIX (2005), Benjamin de Bouillis (2005), Musings (2009), Pina Jackson in Mercemoriam (2009), and Histoires Condansées (2011). He has been commissioned by the Nederlands Dans Theater II, the Ballet de Berne, the Ballet Junior de Genève, in 2010 by the SACD and the Festival d’Avignon with Au Contraire, in 2012 by the Théâtre de la Fenice. He has been supported annually by the Geneva and Swiss public authorities since 2002, received the Leenaards Foundation grant in 1999 and the prize of the prestigious Foundation for Contemporary Arts in New York in 2009. He won, among others, the Lausanne Prize in 1987, the Bessie Award of New York in 1995 “in recognition of outstanding creative achievement; for the innovation, speed and clarity of dance that galvanized a remarkable Cunningham company”, the Swiss Prize for Dance and Choreography in 2006 because “Foofwa occupies a pivotal position between tradition and the avant-garde” and the Swiss Dance Prize category “outstanding dancer” in 2013: “Foofwa d’Imobilité challenges us and breaks with convention. His artistic radicalism is based on the exceptional technical ability he has repeatedly demonstrated in Switzerland and abroad. His works often go against contemporary minimalism.” They are rather “surmodern”, in the sense of Marc Augé, because they are linked to the overabundance of information in our contemporary societies. His most recent pieces or performances focus on a practice of “being-here-present” that allows the works to be permeable to unpredictability, spontaneity and authenticity. Between 2015 and 2018, he led in close collaboration with Jonathan O’Hear the Utile/Inutile project, a vast undertaking centered on creation, pedagogy, mediation, historiography and choreographic succession: /Utile: Redonner Corps (2015), /Inutile: Don Austerity (2015-16), In/Utile: Incorporate (2017) & /Unitile (2018). Since 2018, he has been experimenting with his company a new way of creating & touring with the GLocal project (18-present) in order to produce and disseminate his works based on ethical and social values. The Dancewalk, with its multiple artistic collaborators and partner structures, is its flagship production.